VIC WOOD
PROFILE OF A WOODTURNER 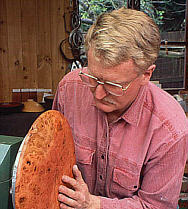 THE EARLY YEARS
Vic was born in Australia at Hallam Valley, Victoria. He was the only child of Lil and Vic Wood Senior, and attended Hallam Valley Pimary School, and then to Dandenong High School.

During his youth they lived on 100 acres of prime grazing land and milked cows, Vic picked mushrooms to supplement his pocket money and was chased by the bull on more than one occasion whilst doing so. Father and son were winners of numerous awards for best animal, bull etc at the local shows.

THE TENNIS CHAMP
Vic was a keen member of the Scouting movement, gaining the Queens Scout certificate, the highest award in Scouting. He was and still is an excellent tennis player, training with his dad on the home grass court, which of course he had to mow and line in between milking cows and study. He was district Champion and chosen in a couple of Victorian State Teams. He was picked by Harry Hopman to come to Melbourne and train with Frank Sedgman. Later he became a registered coach and for many years was a part time coach, combining this with teaching. Vic still plays a great game of tennis and in 1994 was the over 55 Victorian Doubles Champion.

THE FAMILY
After leaving Dandenong High School, Vic attended Melbourne Teachers College, and from there went on to teaching.
In 1960 he married Bev who had also gone to Dandenong high School, they have two sons Steven and Jeff, both are wonderful tennis players and were highly sought after by American Colleges for teams in the US, they were each awarded full scholarships to play tennis for the Universities, and graduated after four years, Steven & Jeff are both married to wonderful American girls and now have families of their own.

THE PRISON BREAK
Vic's first teaching appointment was at Coburg High School in 1959, as the year progressed he was approached by the nearby Pentridge Jail to teach a couple of youths all about woodwork. This was a bit of a challenge but after a few weeks when things seemed to ge going along well, Vic decided to take in some extra equipment, including a couple of pairs of bar cramps. One of the young prisoners he was working with took the liberty of using the cramps to squeeze the bars on his cell window together and escape. You can immagine Vic's shock when the police knocked on his door to inform him that the young murderer had escaped with his help. The escapee was arrested soon after but not before a few very worrying hours.

TEACHING THE TEACHERS (Well! Someone has to do it!)
Vic's next teaching appointment was to Huntingdale High School and then later (about 8 years) with excellent teaching assessments he was seconded by the Education Department to Melbourne Teachers College to train Teachers. A highlight of Vic's time at the College was his organisation and founding of the "Craftsman in Residence" program. This was advertised worldwide and Stephen Hogbin came to the College from Canada for one year, it was a huge success with a film being produced, a book written, and exhibition at the end of the 12 months. It was a great learning experience for the College and has been emulated on a number of other occasions since.

WOODTURNING WORKSHOPS
In 1983 Vic left the College to commence full time woodturning and start "Woodturning Workshops" A scary but positive venture. Since then many hundreds of students have passed through his classes. Vic's Intensive Woodturning Courses are renouned as the best of their kind and are conducted in his well equipped studio. With only two students per course, everyone who attends is guaranteed of first class personal attention.

THE TRAVELING SHOWMAN
Vic has travelled to England, Canada, U.S.A., New Zealand and throughout Australia teaching and demonstrating Woodturning. He has been a key-note speaker and demonstrator at numerous natioonal and international simposiums etc. and judges many woodworking shows. He is the principal judge of the National Woodworking Show and the National Woodturning Exhibition, both held annually in Melbourne Australia.

Vic gained his early reputation from subtle turned and carved wall plaques, which he made whilst a lecturer at the State College. He has since developed his woodturning and produces large pieces which are sold mainly through exhibitions, as well smaller square edged lidded boxes which are his signature and sold through galleries around the world. His work is also represented in numerous major collections worldwide.